In Her Defense by Denise A. Agnew 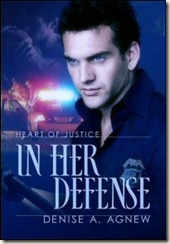 Celeste Rice's life has been shattered by terrible violence more than once. Violence threatens to creep back into Celeste's world when her ex-boyfriend stalks her. When Celeste inherits her aunt's home, she decides to move back into her childhood neighborhood after long years away. Upon her prodigal return, she encounters old friend and long-time object of her desire, Mick MacGilvary at a charity event and knows that she is finally ready to pursue that heart-stopping attraction. She believes she'll stop craving him if she has sex with him once and gets it out of her system. She decides to test the wildfire attraction, even though Mick's violent past and his SWAT position frighten her.

Mick will do anything in her defense…

SWAT cop Mick MacGilvary's instincts tell him Celeste's ex-boyfriend has something evil up his sleeve. Mick's uneasy past with Celeste makes him gun-shy around her. His protective feelings for Celeste have never abandoned him. Ten years ago, Celeste rejected his advances, and he hasn't forgotten. The heavy-duty attraction he's always had for her ramps up now that she's near. Better yet, she's obviously interested in bedding him.

Danger lurks around the corner…

Caught up in a passion neither of them can deny, Mick and Celeste's strengths and weaknesses are tested when her ex-boyfriend decides if he can't have her, no one will.

There are lots of ways to tell you’ve read a good Romantic Suspense novel, good characters, good plot and a strong mystery. IN HER DEFENSE has all that, but it has the one thing that makes it an Excellent Romantic Suspense!

It’s excellent because from all most the very beginning we know who the bad guy is yet I was still twisted in knots as I read it. The reader know right away that Darrell is the bad guy. Celeste tells us when she asks Mick for help, we see it when he accosts her in the parking lot, yet I was still on the edge of my seat just waiting to see what Darrell was going to do. Added to that is I read this book before, I mean hello I know what’s going to happen, yet as I sat downstairs with my DH reading this novel while he watched the UFC fights I stopped to tell him just that.

There are so many good things about this book starting with Celeste, she is a survivor plain and simple, as her past is exposed to the reader you can’t help but feel for her. I can’t blame her for wanting to be in control of her life, for wanting to stand on her own and I applaud her for becoming the well adjusted woman she is. She should be disillusioned, she should be bitter and she just isn’t. My only beef with her was her refusal to move in with Mick as they tried to make Darrell go away, but that has more to do with me being a chicken then with Celeste’s choice.

Mick is in a word HOT! Course that’s just one word to describe him, he’s also loyal, protective, caring, handsome, sexy, dangerous and Alpha to the nth degree. Simply put he is just want I want in a Romantic Suspense hero, Brave and Sexy, oh boy I could go on and on about Mick. He can be so frustrating to Celeste and it does my little old heart good to see him struggle with his feelings for Celeste, his desire to do things his way and his desire to keep her safe.

The two of them clash in so many ways throughout IN HER DEFENSE and that is what adds to the tension of waiting for Darrell to strike. A fast paced novel with tummy churning suspense and steamy sex makes this novel a must read for anyone who loves a really excellent Romantic Suspense Novel.

Jenn,
Thank you so much for the fantastic review! I appreciate it more than I can say. :)

You are very welcome. I'm currently reading book three and I'm about 40 pages in. I'm loving it so far and I'm hoping to get to finish it tonight, but life may conspire to get in my way.

Jenn
I'm a wife, mother, friend and have been known to forget everything for a good book. I love to socialize, but can be somewhat quiet online. Thanks for dropping by to my little corner of the net.